Yantai, China / Updated: 2015-05-26 / PR Newswire – The International Coiled Tubing Seminar & Founding Ceremony of ICoTA China was held on May 22nd, 2015. The Chapter is the seventh regional association of ICoTA, established following those in the USA, Canada, Latin America, Russia, Europe, Middle East and North Africa. Presided by Jason Gao, the first chairman of ICoTA China and general manager of JASON O&G Equipment, LLC, the occasion was attended by over 50 professionals from all over the world, including former chairman of ICoTA USA, the Chairman of API 5ST, deputy chief engineer of Jereh Group and the experts in coiled tubing from Schlumberger. 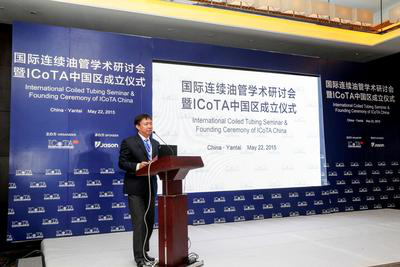 Established in 1994, ICoTA is an independent not-for-profit organization on a membership basis. The mission of ICoTA is to build channels of dialogue among the members and form a platform of communication and interaction for the manufacturers, suppliers, service providers and end-users in the associated fields, including coiled tubing, well testing wire, well logging cable, hydraulic workover rig and pumping, promoting the rapid and sustainable development of the coiled tubing industry.

Mr. Jason Gao, the first chairman of ICoTA China and general manager of JASON O&G Equipment, LLC, said that the establishment of ICoTA China would positively influence the introduction and promotion of the new processes in coiled tubing manufacturing as well as the training of top professionals.

“Though having such advantages over regular operations as high efficiency, great economic benefits and little formation contamination, coiled tubing is applied at most domestic oil fields as nothing but a method of solving problems, which results from the lack of top professionals and processes in China.” According to Gao’s analysis, “Compared to North America, where several seminars are held every year to advance the industry, China is in need of the atmosphere of academic discussion as well as the introduction and promotion of the new technologies and processes, which hinders the further application of coiled tubing in China. In response, ICoTA China was established to form a platform of communication and learning for the workers in this field.

In addition, the huge market demand from the oil fields in China calls for the establishment of ICoTA China.

Established in 2011 and headquartered in Houston, JASON O&G Equipment, LLC is dedicated to the R&D, manufacturing and sale of a wide variety of equipment and components for oil and gas fields, like plunger pumps, well-control equipment and high pressure pipe joints. JASON was also the organizer of the International Coiled Tubing Seminar 2015, after which all the attendees visited manufacturing base in Yantai.